“I SAT HERE LAST NIGHT AND TRIED TO REMEMBER ALL THE NAMES, BUT IT’S BEEN SUCH A LONG TIME AND I DON’T HAVE MANY CHANCES TO TALK ABOUT THOSE DAYS ANYMORE,”

explains 103-year-old Mary Coldren Kurian as she looked at a framed photograph of her 1936 Lancaster General Hospital School of Nursing graduation class. Fortunately, a recent chance encounter at Homestead Village, where Mary has lived since 1996, has helped to spark her memory, while forging a meaningful connection between  two women devoted to the nursing  profession. It’s not difficult to imagine how much nursing education and practice have changed since Mary entered the field. But when current three-year BSN student and Homestead Village employee Cassie Kohr met Mary, she was delighted to learn of their shared experience. Since then, in moments here and there, and longer visits after dinner, Cassie and Mary have swapped stories, marveling at all that is new, and all that’s stayed the same.

While her family couldn’t afford to send her off to a four-year college after high school, earning a spot in the nursing school turned Mary’s life in a new and ultimately wonderful direction. Once enrolled in the three-year program, Mary and her classmates were expected to dive right in, with daily shifts on the hospital floor. Classroom instruction was something the young women were “excused” from duty to attend. ‘Tm from the old school;’ shares Mary, and many of the stories she tells today center around the strict expectations of her supervisors and instructors. Mary’s uniform, made by her mother, was a striped dress with a starched apron. White starched cuffs that rose to her elbows had to be removed each morning by 10 a.m. before bathing patients. Each day, the students had to carefully prepare their own bandages from large bolts of gauze, and they learned to store linens and make up patient beds “just so” (the open end of a pillowcase must always face away from the doorway). 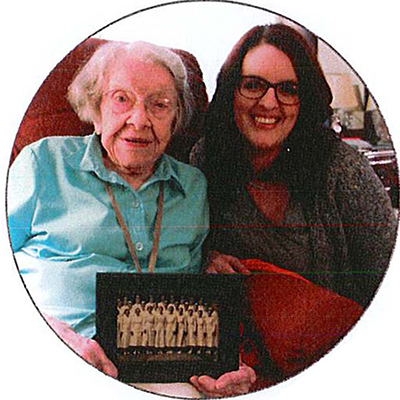 Following graduation, Mary served as President of the school’s Alumni Association for nearly a year as she began her long nursing career at Lancaster General Hospital. When Mary decided to become a nurse anesthetist, LGH provided $30 per month toward the costs of her program, which she completed in Detroit in 1942. During World War II, Mary registered with the Red Cross as a volunteer nurse, but was never called upon to serve. However, she did recall that she and her fellow students were sent to military recruitment centers to practice drawing blood from the would-be servicemen. Mary settled into family life and her career, but following the death of her husband James at age 37, she bought the house next door to her parents (and just blocks from the hospital). The move made it easier for them to help this newly widowed working mother care for her two children. Mary retired from her nurse anesthetist role in 1980 and notes of her life-long local connection: “I was born at LGH, trained at LGH, spent my career at LGH, and retired from LGH. So don’t send me anywhere else.”

Many decades have passed since Mary’s student days, but it’s clear that her class photo is both a cherished memento and a powerful touchstone for a life in nursing. And yet, she recently believed it was gone for good. After learning that the photo had been misplaced during a move, Cassie was determined to help. She contacted our Office of Alumni Relations, obtained a copy and gave it to Mary as a Christmas gift last year. Mary is thrilled to have her photo back in its proper place, and to see the legacy it represents carried on by Cassie, in both her compassionate care and her ability to fold and rotate Mary’s linens “just so.” “I’m fussy about things,” explains Mary, “but Cassie always takes care of me.”

Thanks to LGH Nursing School Periodical for providing this article.