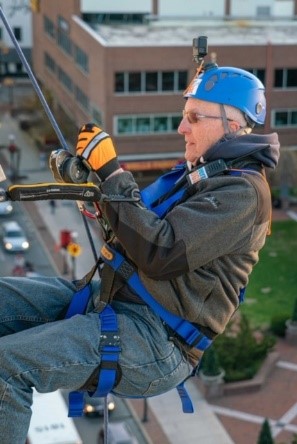 On Friday, November 22, 2019, Resident Tom Kile did several things that he never thought he would do.

Thankfully, it was all very well planned. Tom had brought a rappelling company to help out with fundraising for a local non-profit, VisionCorps, during the Extraordinary Give. The result? 94 people rappelled off the Holiday Inn, with each person bringing in more than $1,000 in donations.

Tom, who serves as secretary and treasurer of VisionCorps, brought the idea to Megan Tomsheck, the vice president of the VisionCorps Foundation. Megan ran with the idea. They decided to set a fundraising goal of $151,000, a number that Tom thought it unlikely to achieve. At the end of the day, the foundation had raised more than $167,500. 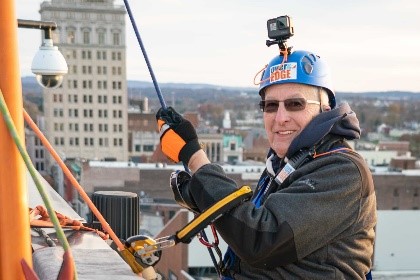 VisionCorps serves people who are blind or vision-impaired through preventative, rehabilitative, and employment opportunities. All services are provided at no cost to the clients. It is not a government agency, and it relies on support from the community to make its services possible.

The rappelling event, named “Eye Drop 2019,” was a huge success. So much so that Tom says he is gathering a list of people interested in rappelling next year. Would he personally go down again? Perhaps. 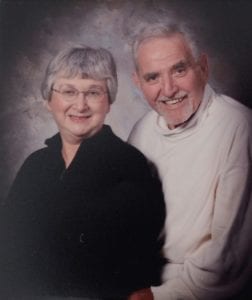 Given by the Community Action Partnership of Lancaster, the Essence of Humanity Award recognizes those individuals who—beyond the requirements of their work—demonstrate a spirit of caring for individuals dealing with adversity. Winners also show remarkable courage, love, strength, determination, encouragement, inspiration, and persistence every day.

Homestead Village Residents Phil and Rhea Starr were presented with this award recently. Nominated by Dr. Leroy Hopkins, the Starrs have been advocates for women, children, and the economic disadvantaged since the 1970s.

Phil began his work in Lancaster as a social worker at the Lancaster Cleft Palate Clinic. Later, he took up the difficult task of creating a foundation for the Southeast Lancaster Health Center (now Lancaster Health Center). After his retirement from the health center, he became the director of development for Harb-Adult, which provides transitional housing to economically disadvantaged individuals.

Rhea began her work in Lancaster as a childcare advocate at the YWCA. Rising through the ranks, she became a program coordinator and then childcare and public affairs program director. In 1987, she accepted a new challenge to be a field consultant for YWCA USA and management consultant to the 37 YWCA locations in PA. From 1987 to 2002, Rhea served in various positions (management consultant, director of association network services, interim associate executive director, and director of childcare services and advocacy) for YWCA USA. When the PA Council of YWCAs received the Racial Justice Award for its work improving race relations in 1996, the award was dedicated to Rhea for her work with the council.

The couple was honored during the 32nd Annual Rev. Dr. Martin Luther King Jr. Breakfast in January: “Peace in the Presence of Justice: Transforming Communities Through Restorative Practices,” held at Millersville University. The Essence of Humanity Award is made possible by the High Foundation.